ForexBrokers.com is committed to the highest ethical standards and reviews services independently. Learn How We Make Money
Home Reviews 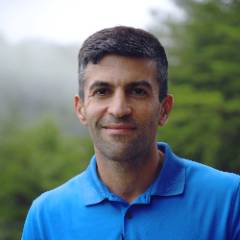 The BDSwiss brand caters to over 1.6 million registered forex and CFD traders, and offers the full MetaTrader platform suite alongside its own proprietary BDSwiss Mobile and WebTrader apps. BDSwiss demonstrates good order execution statistics (which the broker publishes monthly), produces quality research, and provides access to over 1,000 tradable symbols – though its spreads are higher than industry leaders.

ForexBrokers.com has been reviewing online forex brokers for over six years, and our reviews are the most cited in the industry. Each year, we collect thousands of data points and publish tens of thousands of words of research. Here's how we test.

BDSwiss is considered average-risk, with an overall Trust Score of 83 out of 99. BDSwiss is not publicly traded and does not operate a bank. BDSwiss is authorized by one tier-2 regulator (average trust) and one tier-3 regulator (low trust). Learn more about Trust Score. 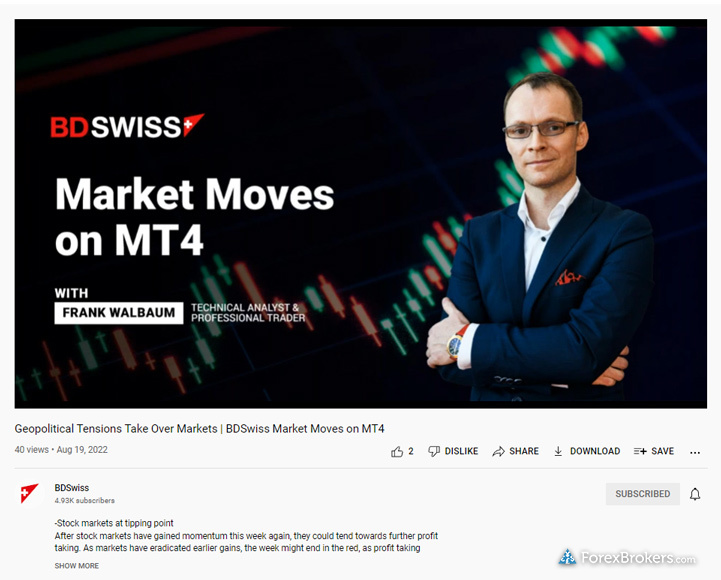 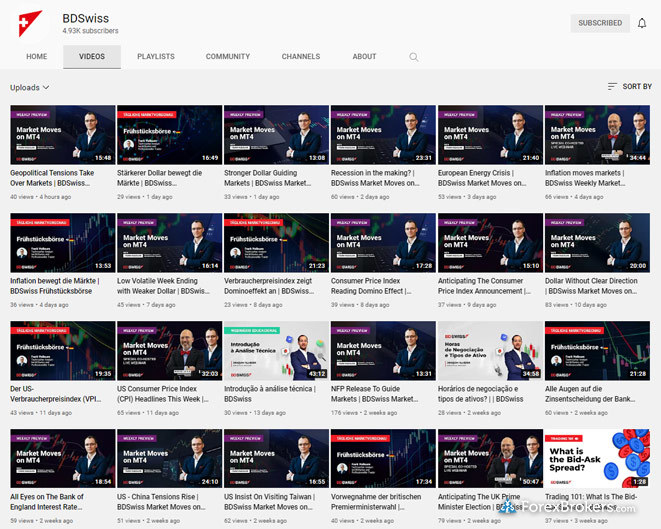 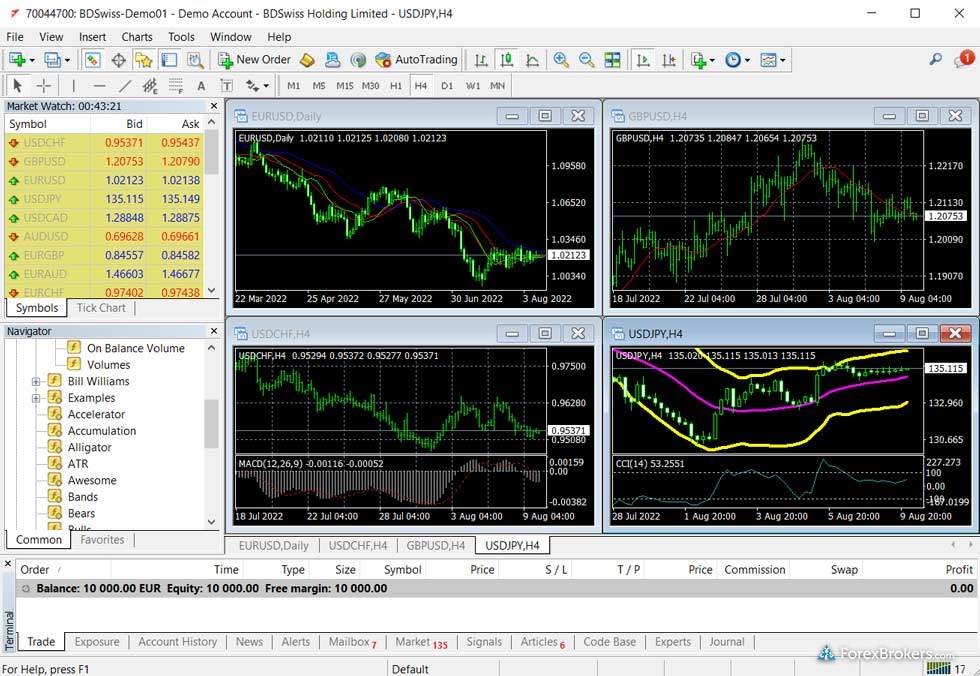 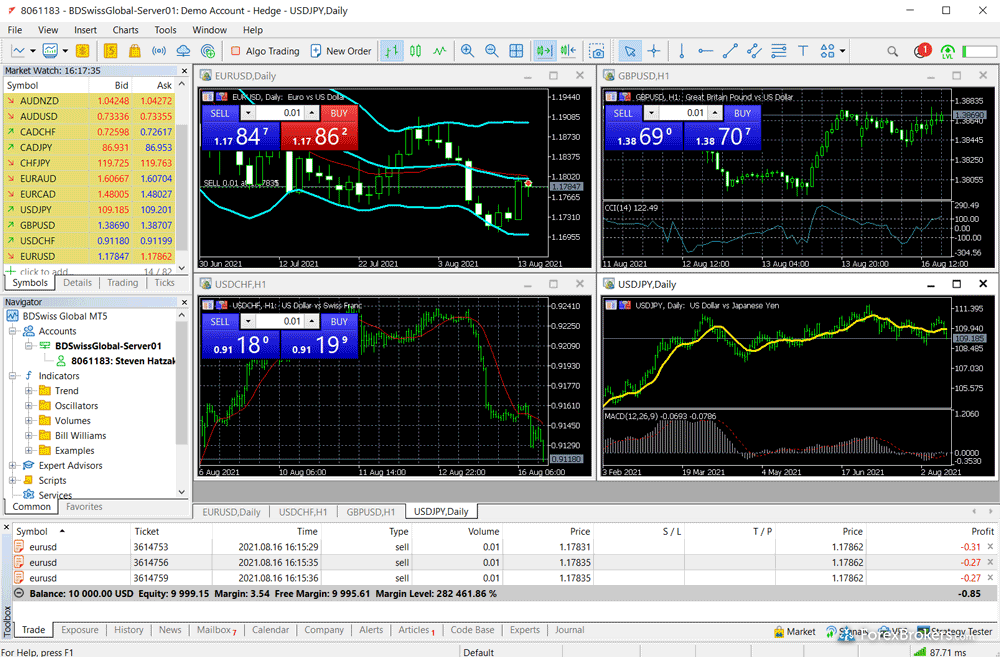 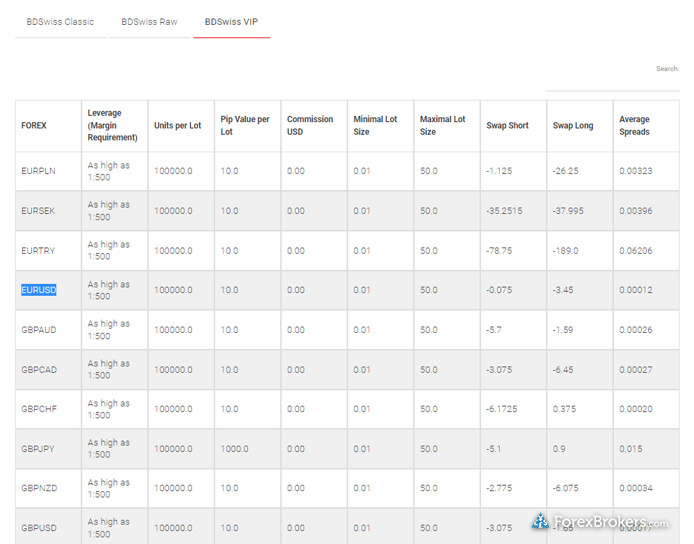 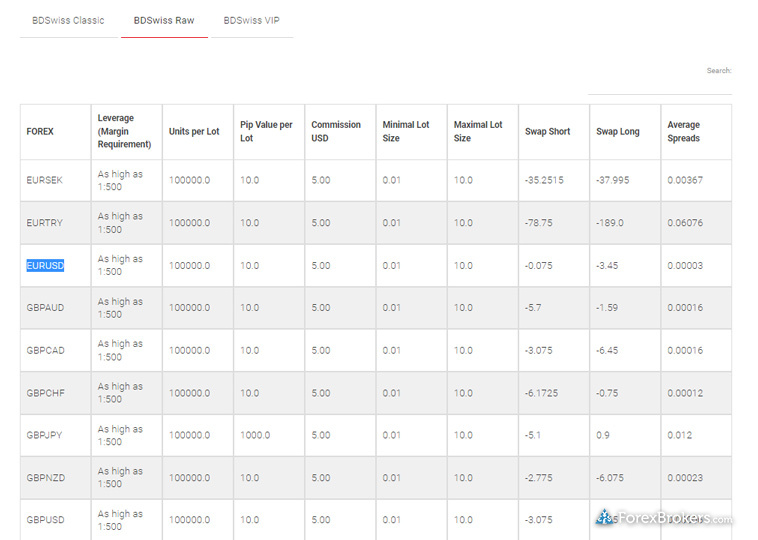 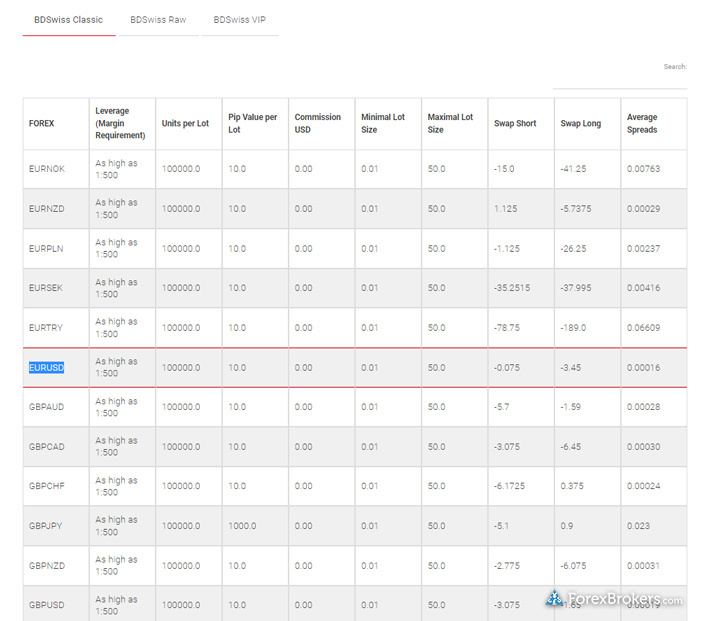 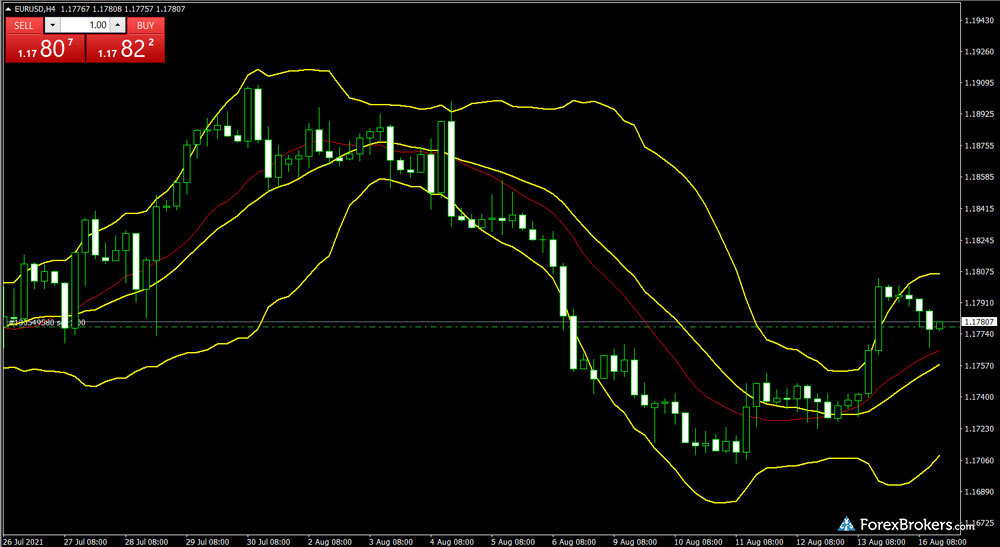 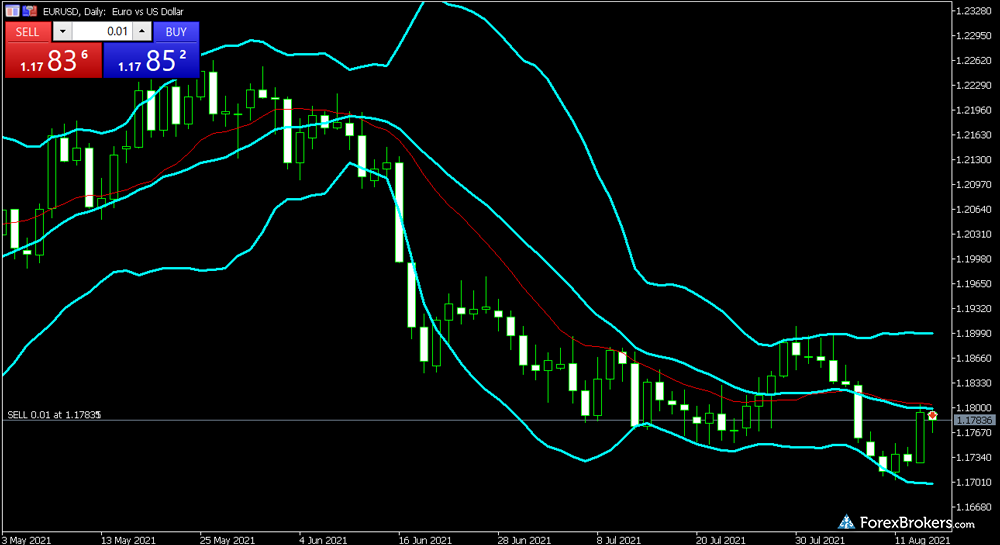 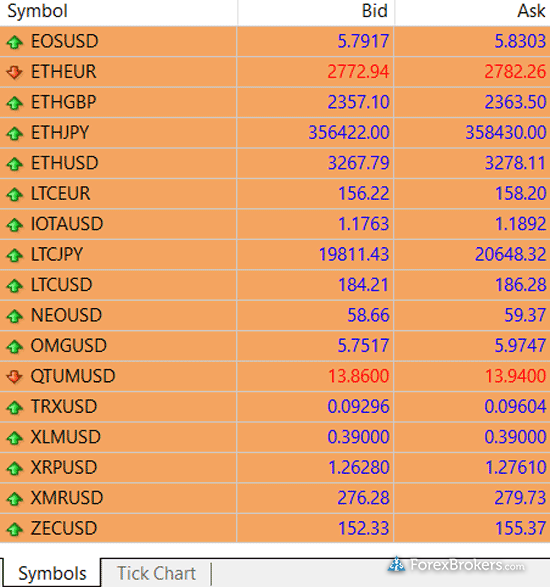 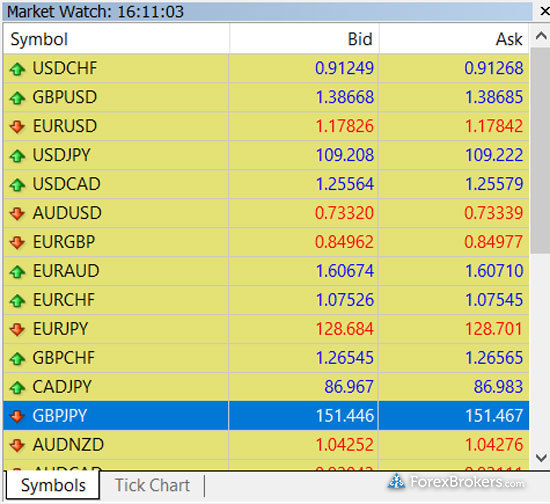 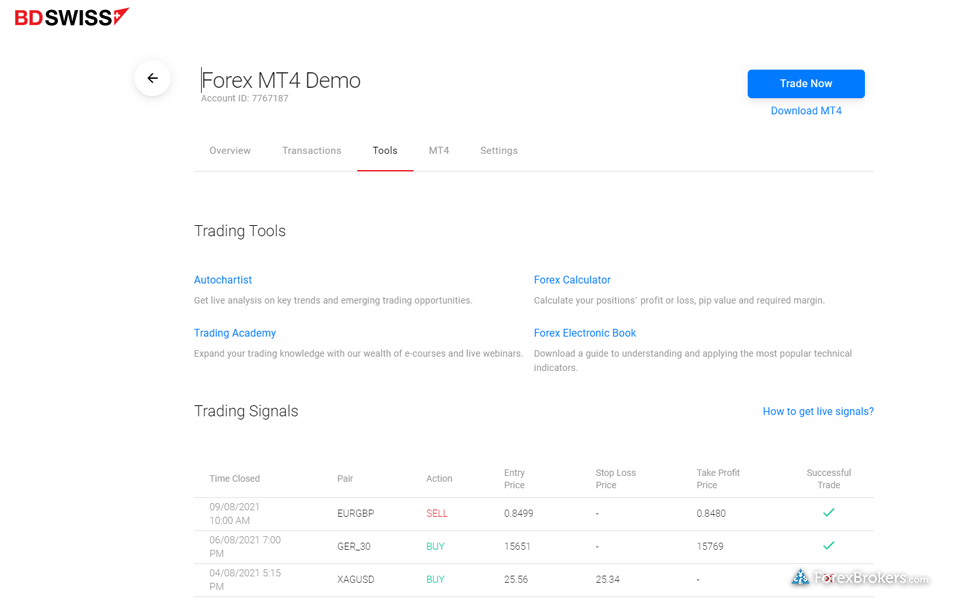 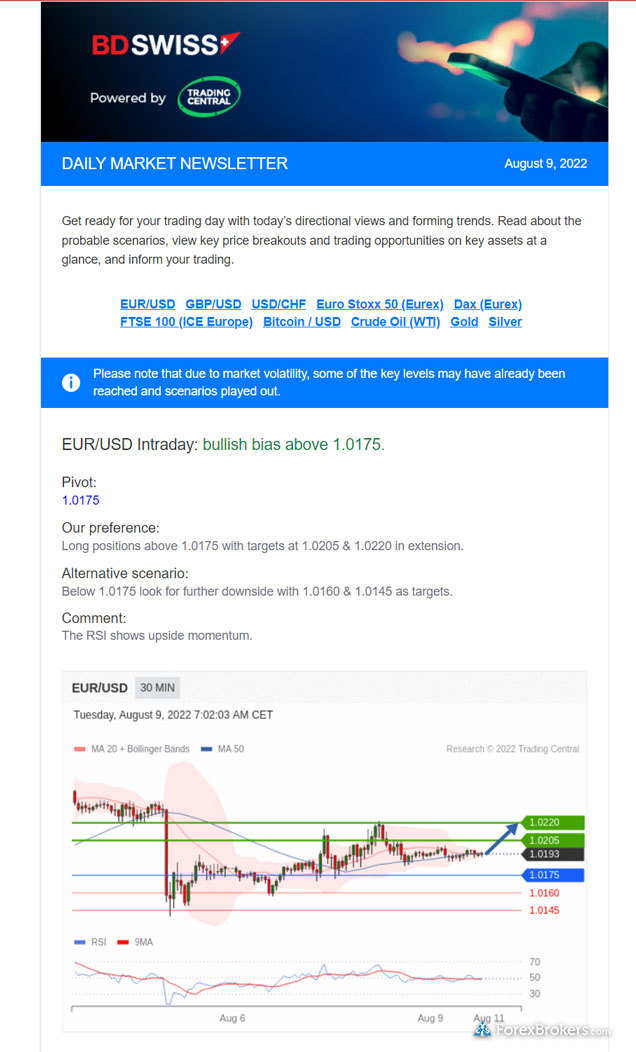 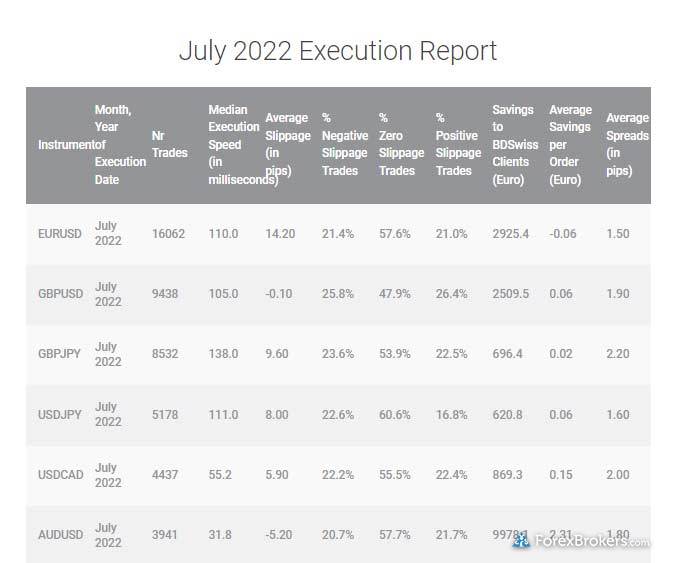 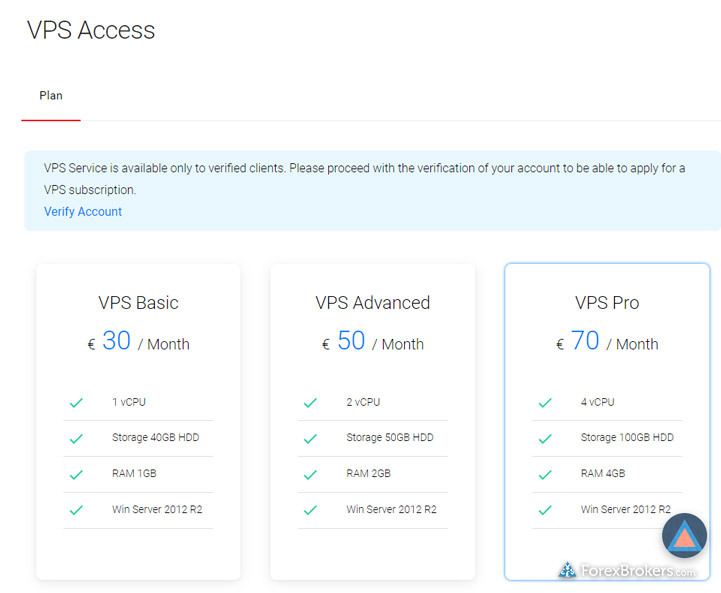 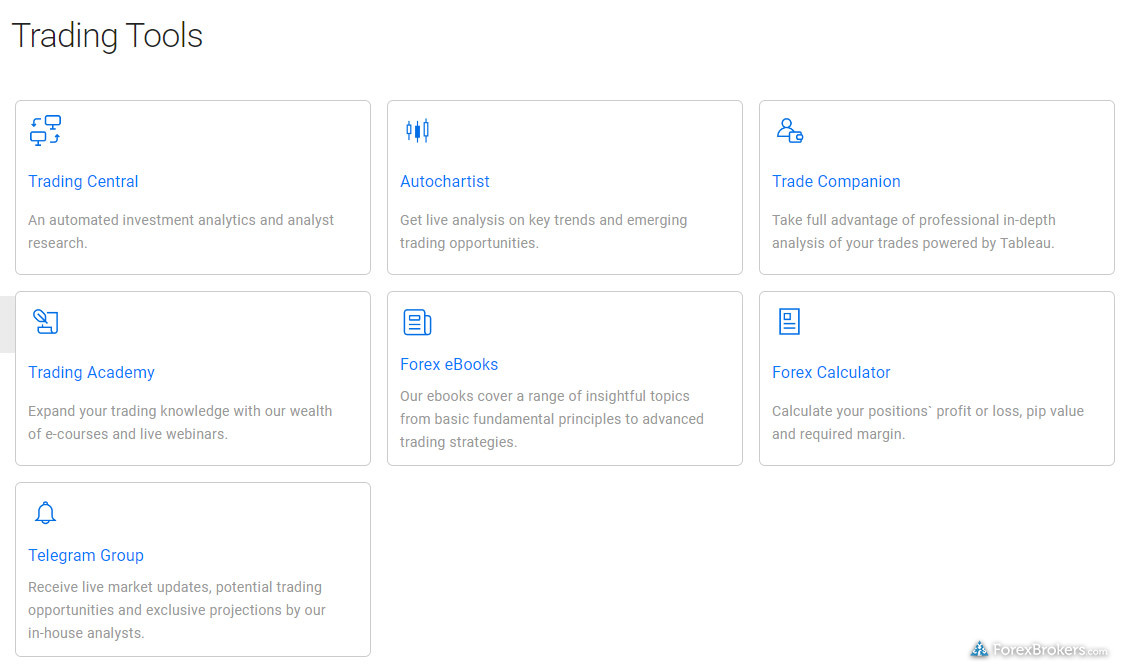 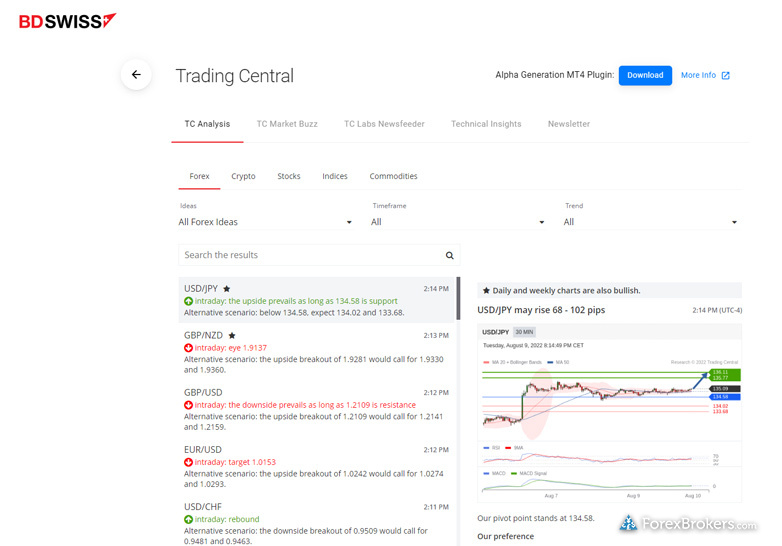 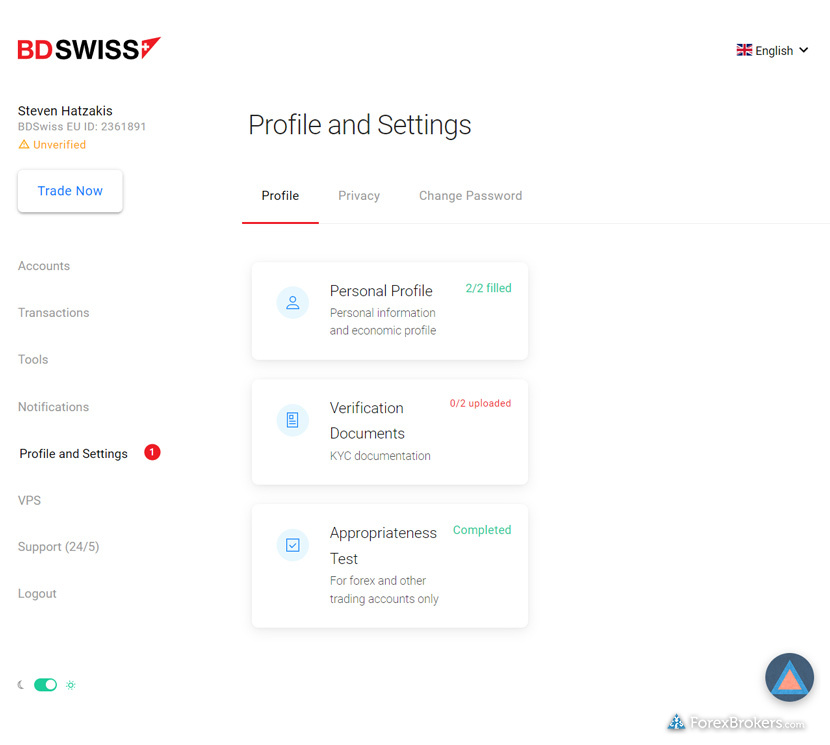 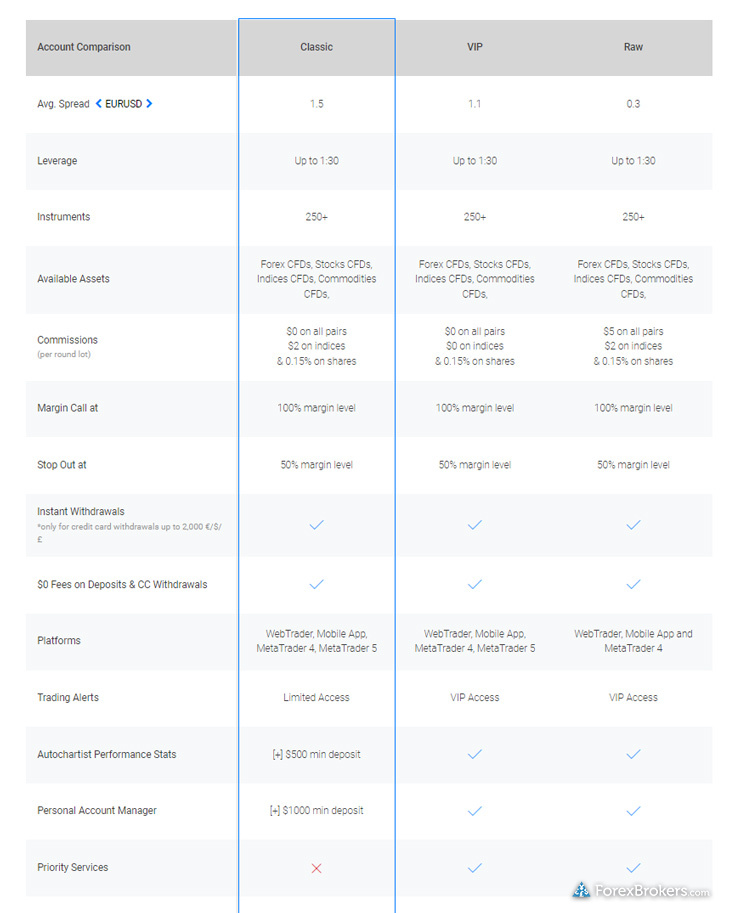 Yes, BDSwiss holds several regulatory licenses across the globe, including in the United Kingdom (U.K.) with the Financial Conduct Authority (FCA). However, BDSwiss’ services are temporarily on hold in the U.K., due to a restriction put in place by the regulator that prevents BDSwiss from accepting U.K. residents (at least for the time being).

That being said, BDSwiss holds multiple regulatory licenses throughout the EU, including from Cyprus where it is authorized by the Cyprus Securities and Exchange Commission (CySEC). It is also regulated as a Tied Agent under its German entity, and is passported across the EU (and outside of the EU into Switzerland). The brand also holds an offshore regulatory license from the island nation of Mauritius.

What is the minimum deposit for BDSwiss?

The minimum deposit at BDSwiss will vary depending on your chosen account type. The broker’s VIP account requires a $3,000 minimum deposit and its Raw account requires $5,000, while the Classic account’s minimum first deposit of $100 (or currency equivalent) may vary depending on your country of residence and if you were referred by a third party.

What happened with BDSwiss in the UK?

In May of 2021, the FCA cited BDSwiss for prohibited marketing practices originating from certain of its affiliates and social media influencers, and required that the broker halt doing business in the U.K. and refrain from marketing to U.K. residents until a number of outstanding items are rectified by the broker, as per the FCA announcement.

In a nutshell, the FCA has imposed rules which restrict the marketing and sale of CFDs to retail consumers, and the FCA believes that BDSwiss - via some of its affiliates - broke those rules.

BDSwiss partnered with affiliates that marketed referrals to retail traders, and in the process they largely referred them to BDSwiss’ overseas firms that don’t provide FCA protections. Essentially, this means that U.K. consumers were being encouraged to open accounts with a broker they associated with the FCA, but did not receive the protections that should be afforded by an FCA-regulated broker.

According to the FCA, “almost 99% of them were referred to the Overseas Firms, meaning the clients did not benefit from the protections afforded to consumers dealing with an authorized firm.” Additionally, BDSwiss’ affiliates marketed trading signal providers, and in doing so they “frequently fail(ed) to mention that the underlying financial instruments being recommended are CFDs.”

Post-Brexit note: Leading up to Brexit, many brokers in the EU that were previously passported under MiFiD in countries such as the U.K. had to either obtain a full registration with the U.K. post-Brexit, or operate under a Temporary Permission Regime (TPR) to give them time to become regulated or exit the U.K. altogether. BDSwiss is still operating under the TPR in the U.K.

At ForexBrokers.com, our reviews of online forex brokers and their products and services are based on our collected data as well as the observations and qualified opinions of our expert researchers. Each year we publish tens of thousands of words of research and detailed forex guides, and we monitor dozens of international regulator agencies (read more about how we calculate Trust Score here).

Our research team conducts thorough testing on a wide range of features, products, services, and tools (collecting and validating thousands of data points in the process). We test all available trading platforms for each broker – whether they are proprietary or come from third-party providers – and evaluate them based on a host of data-driven variables.

We also take an in-depth look at each broker’s commissions and fees, such as bid/ask spreads – including the average spread data for some of the most popular forex currency pairs. We research other trading costs, such as inactivity or custody fees, minimum deposit requirements, VIP rebates and/or discounts, and a range of other important fee-based data points.

Some of the other important research categories that are factored into our testing include mobile trading accessibility and capability, availability of market research and educational content, and each broker’s overall Trust Score.

Read our full explanation and accounting of our research and testing process to learn more about how we test.

There is a very high degree of risk involved in trading securities. With respect to margin-based foreign exchange trading, off-exchange derivatives, and cryptocurrencies, there is considerable exposure to risk, including but not limited to, leverage, creditworthiness, limited regulatory protection and market volatility that may substantially affect the price, or liquidity of a currency or related instrument. It should not be assumed that the methods, techniques, or indicators presented in these products will be profitable, or that they will not result in losses. Read more on forex trading risks.

See how BDSwiss stacks up against other brokers.

Select one or more of these brokers to compare against BDSwiss.

About the Editorial Team


Steven Hatzakis is the Global Director of Research for ForexBrokers.com. Steven previously served as an Editor for Finance Magnates, where he authored over 1,000 published articles about the online finance industry. A forex industry expert and an active fintech and crypto researcher, Steven advises blockchain companies at the board level and holds a Series III license in the U.S. as a Commodity Trading Advisor (CTA). 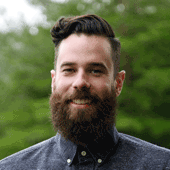 
John Bringans is the Senior Editor of ForexBrokers.com. An experienced media professional, John has close to a decade of editorial experience with a background that includes key leadership roles at global newsroom outlets. He holds a Bachelor’s Degree in English Literature from San Francisco State University, and conducts research on forex and the financial services industry while assisting in the production of content. 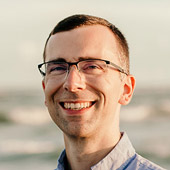 
Blain Reinkensmeyer has 20 years of trading experience with over 2,500 trades placed during that time. He heads research for all U.S.-based brokerages on StockBrokers.com and is respected by executives as the leading expert covering the online broker industry. Blain’s insights have been featured in the New York Times, Wall Street Journal, Forbes, and the Chicago Tribune, among other media outlets.